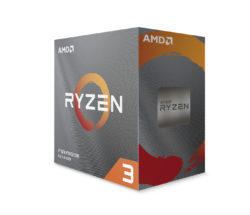 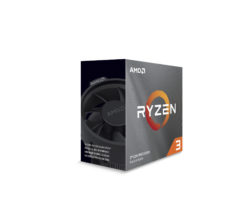 Do more. And do it faster.

The AMD RYZEN 3 3300X 4-Core 3.8GHZ AM4 CPU is the fastest AMD Ryzen™ 3 processor on the market and made for intense gaming.

Setting the Bar for High Performance

The “Zen 2” core is a significant update to the historic “Zen” architecture. Now featuring:

Powered by the AM4 Platform

AMD Socket AM4 represents the company’s future-proof platform enabling: the fastest DDR4 memory, PCIe® 4.0 for NVMe and graphics, plus the first native SuperSpeed USB 10Gbps support on a chipset. With processor-direct SATA and USB connectivity, configurable for real-world flexibility, the AM4 platform takes advantage of the leading-edge features of today and tomorrow.

Every AMD Ryzen processor is multiplier-unlocked from the factory, so you can personalize performance to your taste. AMD provides the AMD Ryzen Master utility to access this powerful advantage.1,2

AMD Ryzen Master provides for up to four profiles to store custom user-defined configurations for both the Ryzen™ CPU, integrated Radeon™ Vega graphics and DDR4 memory. You can adjust active cores, integrated graphics frequency and adjust memory timings, too, to optimize general performance or fine tune for your favorite applications.

The integrated GPU in the AMD Ryzen™ with Radeon Vega graphics processor can also be overclocked for even higher gaming performance when overclocking cores and memory. Tune up your favorite game, rename the profile and you can easily return to the optimized setting.

Accurate hardware status updates are vital, so AMD Ryzen Master has you covered with both real-time monitoring and a histogram of per-core clock rates and temperature, including average and peak readings.

What’s In The Box: